Pussy Riot are back in the news, hopefully to have their appeals overturned.  I expect a return of the pearl clutching by offended Christians.  After all, no one worth listening to would do something as harsh as trying to throw moneylenders out of a temple.  (The temple itself hates this and wants them to publically repent).

Especially not when what they were protesting was not just Putin himself, but Patriarch Kirill I (born Vladimir Mikhailovich Gundyayev), leader of the Russian Orthodox Church.

Krill is a man who called Putin’s two terms as president “A Miracle of God.”  Patriarch Krill being a man so devoted to the ideal of poverty that, as others noticed, the Russian Orthodox Church photoshopped out a £20,000 wristwatch on his photo.  And then he denied ever having worn the watch. (Image from Pet Snake Reggie).  He’s also petty enough to deny that forgiveness is appropriate for someone who gets dust on his books while having renovation work done, instead suing them for over half a million dollars. 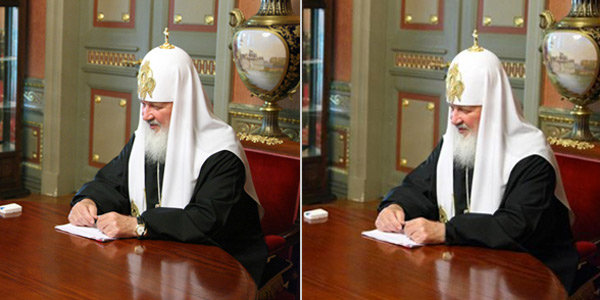 It reminds me of an old childrens’ Spot the Difference game – spot the reflection.

As we can see from the words of “Virgin Mary, Put Putin Away” (translation:The Guardian with a the ‘Holy Shit’ pun clarified by Metafilter) this is not an Atheist anthem in the slightest.  The chorus might be against Putin – but every single verse is about the Church or the Patriarch, and in only one is the subject Putin as well as the Patriarch.

(end chorus) …
Black robe, golden epaulettes
All parishioners crawl to bow
The phantom of liberty is in heaven
Gay-pride sent to Siberia in chains

The head of the KGB, their chief saint,
Leads protesters to prison under escort
In order not to offend His Holiness
Women must give birth and love

The Church’s praise of rotten dictators
The cross-bearer procession of black limousines
A teacher-preacher will meet you at school
Go to class – bring him money!

Patriarch Gundyaev believes in Putin
Bitch, better believe in God instead
The belt of the Virgin can’t replace mass-meetings
Mary, Mother of God, is with us in protest!

(end chorus)
“Patriarch Gundyaev believes in Putin
Bitch, better believe in God instead”
———————————————-
Pussy Riot’s Punk Prayer is possibly the most Christ-like thing to have been preached from that pulpit in the last ten years.  And I’ve signed the Amnesty Petitions, and hope that anyone reading this who hasn’t will do so.